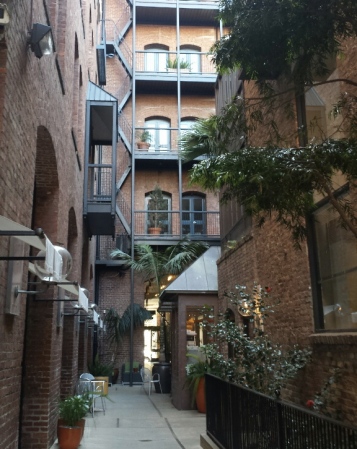 After 17 years spent living in San Francisco, I still find tiny slivers of pure paradise tucked around corners and nestled between buildings, just waiting to be discovered. This week found me uncovering one of these hidden gems in one of my very, very favorite slices of the city. I’ve always known it as the “antique district,” though technically it’s the “Jackson Square Historic District.” It’s part nostalgia for me recalling a previous life spent doing some work in this part of town and partially appeals to my personal aesthetic.  Jackson Square is rich in history, coming to life during the Gold and Silver eras in San Francisco.  It retains most original buildings of the 1850s and 1860s and immediately transports one back to that time for a moment.

Mr. City Mouse recently opened office space in the antique district and I was lucky enough to join him for a coffee one morning. Truth be told, the uber-hipster coffee options are plentiful in this neighborhood. And he literally went down a quick list, debating options, “…the organic café is pretty great or the coffee truck always has amazing coffee…wait!  I know exactly where we should go….” And he led me down a street, around a corner and then abruptly, turned in the middle of the block and walked me through a wrought iron gate spanning two brick buildings. What appeared before me, made my skin tingle. It reminded me of Europe. It was hidden. It was intimate. It was old and new all at once and was ringed on all sides by small office spaces, housing start ups and funds and firms. There was a quiet, almost silent, desperately throbbing energy to the space.  This was Jackson Place and the home of the Jackson Place Cafe.

It’s billed as …”one of San Francisco’s best kept secrets.”  And I would agree.  It’s idyllic. While sipping a piping hot espresso, one is shadowed by wrought iron railings and twinkly lights. The bricks, climb high above the trees, chipped and uneven, beautiful in their asymmetry with grays and burnt orange, faded to almost white in places.  Flickering gas lamps strain to cast their glow amidst the bright sky, which filters down through the towering buildings.  Strangely, the city ambience largely dissipates in this oasis and one is left listening to a soft music soundtrack of I’m sure, whatever Pandora station was chosen to set the mood by the barista. On my visit it sounded like the selected station may have been “John Mellencamp.”

It’s here that one can grab a specialty coffee, made with care at the window. The Jackson Square cafe serves a limited menu of coffees, breakfast and lunches to go: High in quality.  Artisanal.  Expensive. Delicious.

I do love history and sitting in the plaza, I could almost feel the energy of a long-lost century and evoke a vision.  If only these bricks could whisper their secrets from the past…. I’ve got to think that the energy and pulsating drive of the Gold rush pushes up and through the toes of those now innovating in industry within these walls. The ghosts wander about here, I’m sure, in their tattered clothes and bottomless shoes abandoning boats and salty oceans for dusty hills, under a blazing California sky, searching for sparkle among the rock.  And now I’ve discovered this, too: a bit of brilliance hidden among the concrete.

A few fun facts about the Jackson Square Historic District:

-It’s one of the oldest commercial districts in San Francisco

-It recalls the Gold and Silver era

-Some of that landfill is made up a hulls of ships, abandoned in the rush to the Gold county

-Now it’s home to interior designers, law firms, creative agencies and architects, to name a few and has undergone a bit of a renaissance of late

I’m very much personally inspired by this space and will be making regular pilgrimages here when I want to breathe in the history of the city and enjoy a perfect cup of coffee.  It’s worth a stop by if you’re in the neighborhood.

One thought on “Where ghosts, gold & hipster coffee collide”